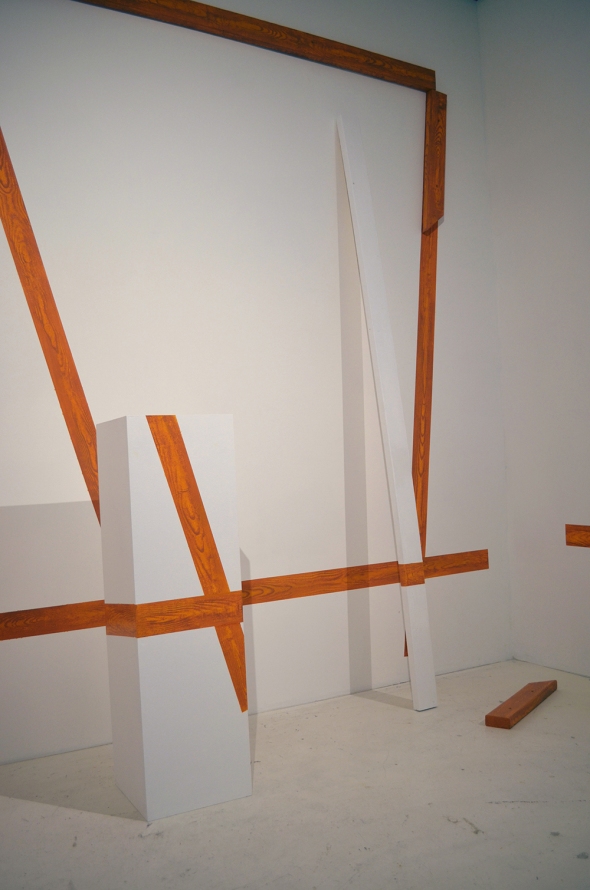 So, this install features a bit of an optical play, slightly confusing 3D items and 2D painting with the notion of haphazard construction. Baudrillard and simulacra, labor in the arts, chintzy wall panelling, optical camouflage, DIY faux-painting techniques, and high modernism are a few of the topics I was considering when planning this out.

Painting has a history of pushing and pulling space, creating optical illusions, then reversing that trend to create sculptural paintings made of actual objects. Within this realm the illusion and the real must attempt a truce, often disdaining their properties. I have attempted to neutralize the elements by painting the 2×4’s as wood (which they are) to match the clearly artificial stripes of wood on the walls. I have made the real objects a superficially heightened version of themselves, so they can become more easily believed as false.

Allowing shadows of the real objects to undermine their attempts to merge into the composition is a nod toward the failures of flatness and the falsity of simulacra. There are more things I could say, maybe about the flatness of art and it’s attempts to block viewer entrance in favor of surface and how faux painting as a craft skill undermines, yet comments on, this tradition of high modernist painting. Or maybe the piece is just humbly goofy enough to be sort of fun, undercutting all this heady commentary.

Speaking of goofy, the title Wood Eye is based on a very bad joke my dad used to tell:

A boy with a wooden eye goes to a dance and musters up the courage to ask a girl with a hairlip: “Would you like to Dance?.”
Her reply: “Would I? Would I?”
His response: “Hairlip! Hairlip!”

Oddly, that pun lead me to think of wood faux-painting as a pun, and when pairing it up with 3D materials I began to think about a flattening of the world, much as a one eyed person has no depth perception.

20 Jun This entry was published on June 20, 2013 at 6:58 pm. It’s filed under Art, The Cube and tagged faux painting, flat, installation, wood. Bookmark the permalink. Follow any comments here with the RSS feed for this post.